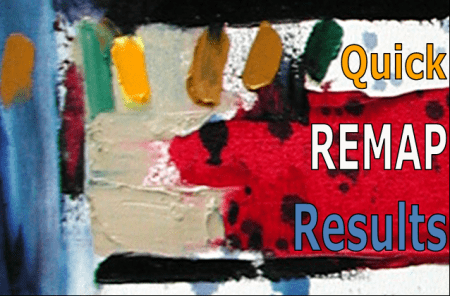 Here are the results of the experiment with the Quick REMAP (4-point) protocol that took place at the end of my presentation at the Association of Comprehensive Energy Psychology’s International Conference in 2007.  In that experiment, I guided a group of participants through an exercise in which they treated themselves for the emotional pain associated with a distressing past event.

I used three ways of gathering data both before and after each person treated their painful event with the Quick REMAP (4-point) protocol:

Here are the findings for the group that consisted of 13 participants (3 men, 10 women) who ranged from 27 to 70 years of age and completed all three of the measures.

This is the most widely used instrument of its type in psychological research.  Databases have been created from people that have taken this test in the past.  Your score can be compared to the average scores of different groups.  For example, there is a database for a “normal adult population”, “high school students”, “military recruits” and others.  It is very easy to see how your score compares.

I asked the people who attended my presentation to think about a painful event that we could treat with the Quick REMAP (4-point) protocol.  When they were in touch with the unpleasant memory, they took the State-Trait Anxiety Inventory (STAI).  The average score (before treatment) was 64.92.  Their scores ranged from 41 to 77.  The highest possible score for this test is 80.  Thinking about their distressing memories caused their average scores to soar near the top of the scale.

After treatment with the Quick REMAP (4-point protocol), they were asked to think about their painful memory once more.  They then repeated the test.  Their average scores dropped to 30.15.  The scores ranged from 20 to 51.  The lowest possible score for the STAI is 20.  Their post treatment score turned-out to be near the low end of the scale.

The average score for a normal group of adults with the same combination of ages and genders is 34.07.

Research has shown that an 8-point change in score is the threshold for “clinical significance”.  The score for this group went from 64.92 to 30.15.  That is a 34.77-point drop.  This is over four times the amount required for clinical significance.

When the scores (which are on a 60-point scale) were converted to a 100-point scale, I was able to calculate the percentage of improvement.  The Quick REMAP (4-point) protocol produced a 77.43 % improvement in the STAI scores.

I also determined the Percentile-Ranking for the group both before and after treatment.

Pre-treatment: 96th Percentile.
This means that when the group originally thought about their stressful memory they scored higher than 95% of the normal adult database.

Post Treatment: 37th Percentile.
This means that after treatment they scored lower than 63% of the normal adult database.

This is a 61.5% improvement in percentile ranking.

Here is the information organized in a concise format.

This is a simple visual analogue scale that ranges from 0 to 10.  In this context, zero represents something that does not bother you at all.  Ten represents something that bothers you as much as you can imagine.  All of the participants experienced decreases in their Subjective Units of Distress (S.U.D.) scale rating.  Eleven of the participants had their S.U.D. scores drop below three.  Two participants dropped much less (2 points and 4 points respectively).  These two may have benefited from a Quick REMAP protocol with a larger number of acupoints or from the more individualized, full REMAP process treatment method.  Even so, the results were still quite good for a brief exercise.

These are symptoms such as a “tightness in the chest” or a “nauseous feeling in the stomach”.  The group of 13 participants reported 45 physical symptoms collectively (3.46 per person on average), when they thought about their distressing events.  After treatment, they thought of their distressing events once more and the inventory was again completed.  I then counted the number of symptoms that become worse, remained the same, improved or were completely resolved.

Here are the results:

There was one more interesting finding.  Since I had about three hours of material and only two hours to present, I found myself near the very end of the presentation before we could get to the exercise.  We were down to less than 20 minutes.  I then had to explain the exercise, review the treatment points and make sure everyone was working with a specific event that was already over.  This left even less time.  In my mind, it felt like we did the experiment in about 15 minutes.  When I got home, I reviewed the CD of the presentation and was both fascinated and surprised.  I calculated that 4:48 minutes were spent tuning-in to the problem and only 6:08 minutes were actually spent activating the treatment points.